Dear readers, It’s always Christmas with me. This year, I started writing Christmas stories in April. Can you believe Christmas carols streaming on my computer, visiting Christmas Pinterest sites, envisioning pine forests and snow, and diffusing Christmas scents in the summer?

So… I’m proud to present my latest Christmas novel, A Wedding for Christmas. Available now at Google Play, and for pre-order from Amazon [releases December 20] for a special price of 99c.

In early December, I also released Deck the Hearts, a small town Christmas romance set to the lyrics of the Christmas Carol, Deck the Halls. In a contest between Christmas lover, Holly Jolly, and Grinch Gordon Gills, whose heart wins? 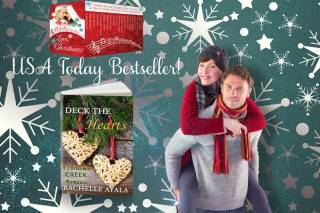 Here is my list of Christmas romances from newest to oldest. Pick up one or all and have a very Merry Christmas!

A Wedding for Christmas (A Veteran’s Christmas, #3) A Christmas wedding seemed perfect for Kelly and Tyler, until a female soldier from Tyler’s past and a donor from Kelly’s past make requests that cannot be ignored. [Amazon, Google Play, Kobo, Scribd, Nook]

Going Toe to Mistletoe (Sapphire Falls) An unemployed dance instructor finds herself on a Christmas scavenger hunt with a hometown hero who’s always stepping on her toes. [Amazon]

Bad Boys for Hire: Nick (Bad Boys for Hire, #3) This Christmas, paraplegic Carol Cassidy is caught between the naughty and the nice: a hired Santa and a disabled firefighter. [Amazon, Paperback]

Her Christmas Chance (A Christmas Creek Romance, #2) A woman with cerebral palsy and her tomcat disagree about the attractive ex-con next door. Will a dose of Christmas magic reach through his dark secrets? [Amazon, Paperback, Paperback-Large Print]

Santa’s Pet (Jingle Belles Christmas Romance, #2) A brilliant girl genius plays elf to a substitute Santa and turns both their lives upside down when he is charged with a sex crime and she loses her company to hackers. [Amazon, Paperback]

Christmas Stray A couple grieving for their son is snowed in with a stray puppy and a little boy. Is there room in their hearts for a Christmas miracle? [Gold Award Winner, 2016 Readers’ Favorite] [Amazon, Nook, Apple, Kobo, Google, Scribd, Paperback, Paperback-Large Print]

Wishing a wonder Christmas to you and your family!
Rachelle