Valentine Hound Dog by Rachelle Ayala
Former fireman Larry Davison covers his burn scars well, by working at an elementary school as a custodian where he finds a lost hound dog behind the dumpster. Fashion designer Jenna Hart is in town to do a charity fashion show when she loses her top model, Little Treat.When Larry turns up with the puppy, she asks him to be in the show and bachelor auction. Larry’s not sure he belongs in a fashion show and balks at being her good deed. Can Jenna convince Larry beauty is never skin deep and love’s arrow strikes not only the beautiful, but the bold?
Excerpt
Unfortunately, now that Connor was promoted to chief, he didn’t hang out as much anymore, which meant Larry was facing a Friday night with a TV dinner in front of a basketball game.
A piercing wind blew as he lifted the dumpster lid, threatening to blow it down. Larry held the lid with one hand and hefted the trash bag into it. Letting the lid slam, he turned toward the warmth of the building.
Something moved near the dumpster, darting behind it. Probably a rat. He should set traps, but not tonight. The wind whined and howled as he opened the door.
Another whine and something furry touched the back of his leg. It was a puppy, likely a basset hound, with a brown and black patchwork face and white paws.
“What’cha doing here, boy?” Larry bent down and held his hand out for the puppy to sniff. There was no collar, but the puppy appeared well groomed and plump. “Did you get lost?”
The puppy licked his hand, and Larry scooped him up. “I bet you’re hungry. Tomorrow I’ll put up a poster. See if anyone lost you.”
He rubbed the puppy’s head and long ears while the puppy licked his jowls and yawned. How could he resist such cuteness?
# # #
“I can’t believe I lost him,” Jenna cried on the phone to her sister, Melisa. “One minute, he was following me to your apartment building, and the next minute he disappeared.”
“Following you?” Melisa glanced at Rob who was driving her home from work. “Didn’t you have him on a leash?”
“The leash and collar were in the shopping bag. I don’t have five hands. I was carrying him and then when I got to the security door, I had to put him down to punch in the code.”
“Couldn’t you have set the bags down?”
“No, that little rascal would have stuck his nose in and stolen a chicken strip.”
“Rob and I are on our way. You stay put and we’ll help you look.”
“Okay, hurry. It’s getting dark, and he’s only a tiny little puppy. I’ve already run all around your building but no one’s seen him.”
“Maybe he went back home. Where did you get him?”
“The rescue center down near where you work. But there’s no way he could have made it back. He’s so tiny and there’s so much traffic.”
“Don’t worry, we’ll find him,” her sister said. “We’re almost home.”
“Good. I don’t know how much more stress I can take. What with the show, the firemen not cooperating, and now my model gone.”
“Model? Which one?”
“Little Treat, the puppy.” Jenna couldn’t help pulling at her hair. “He’s my signature piece.”
“Signature piece? Wait? What about the gowns and the outfits?”
“Those are a mess. I need to get back home and sew, sew, sew.”
“Then what are you doing with a puppy?” Her sister’s voice took on a motherly, or was it a teacherly, tone. How was it that Melisa was younger than her and so calm?
“He’s supposed to be Connor’s bribe so the firemen can undress for my show!” Jenna wailed. “Now, the show will be a flop, all because I lost Little Treat.” 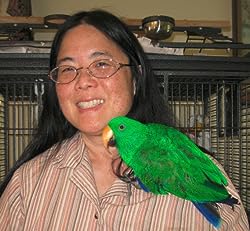 Rachelle Ayala is a bestselling author of contemporary romance and romantic suspense. Her foremost goal is to take readers on a shared emotional journey with her characters as they grow and become more true to themselves. Rachelle believes in the power of love to overcome obstacles and feels that everyone should find love as often as possible, especially if it’s within the pages of a book. Her book, Knowing Vera, won the 2015 Angie Ovation Award, and A Father for Christmas garnered a 2015 Readers’ Favorite Gold Award.