Your Biggest Fan? by Sydney Aaliyah Michelle
Noah Patrick, NFL bad boy, has sworn off women, they only seem to want him for his fame and his money. Callie James is such a big Noah Patrick fan, she named her energetic Chihuahua after the man of her dreams. When they find themselves hiding out in the same Brooklyn Brownstone, a crazy blizzard, a never-ending supply of spaghetti, and a dog with identity issues bring them together even though they both have secrets that would tear them apart.
Excerpt
The knock on my door startled me.
I slowly opened the door and stared straight ahead … into the broad chest of a man. He wore baggy jeans and a blue t-shirt stretched across his pecs. He had removed his hoodie on his way to my place.
My gaze took a journey, not up but down. My brain on automatic spied his black leather high tops, his baggy, faded blue jeans, and the way his t-shirt gathered at his hips. His tan biceps flexed in the opening of his short sleeve shirt.
I stalled not wanting to confirm what I already knew. Every fiber of my being fired off signals on high alert for being so close to the man of my dreams.
Callie, this is getting awkward. Look at him.
I pushed my shoulders back, raised my head, blinked once, and gazed in his eyes.
Hi, gorgeous, coffee-colored eyes.
Noah Patrick.
I screamed and jumped up and down like a little girl. Thankfully, I kept my outburst on the inside. On the outside, I maintained a pillar of indifference.
“Hi.”
“Hey,” he said as his eyes narrowed.
I shifted from one foot to the other and leaned on the doorframe studying his face. I should have seen it the moment I laid eyes on him.
The bags under his eyes weren’t as pronounced as before. The cold must have had something to do with that. His kind eyes were more pronounced under the light in the hallway. A little color had returned to his face, and I could see he’d recently had his hair cut by the way it stood up on end.
He was Noah—my Noah—and he was beautiful. 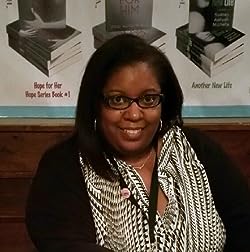 Sydney Aaliyah Michelle is a Contemporary Romance writer, a voracious reader and movie fanatic who hails from Texas.
After surviving 5 1/2 years living in China, she had the courage to finally pursue her passion and become a writer.
Sydney has been blogging at sydneyaaliyah.com for three years, where she interviews people about their tattoos, discusses her favorite movie quotes, and journals about her writing and editing process.
Sydney’s novels tackle that dramatic world that is college and professional football and she writes heroines that love their men and the sport that they play.