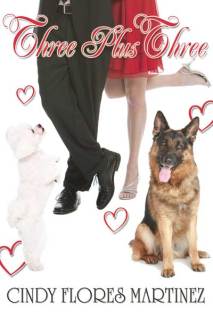 Three Plus Three by Cindy Flores Martinez
Two years after losing her husband, a grieving widow, Violet, and their beloved bichon frise visit their favorite place the day before Valentine’s Day. While they are there, Violet meets a handsome widower who makes her feel alive again.
Excerpt
“Hey, there.” He crouched down and brushed his masculine fingers through the corkscrew curls on the top of Cookie’s head. “What’s your name?”
Violet wondered if she should tell him that Cookie couldn’t hear him. She and Bob had found out days after they rescued her from the local animal shelter that she was hearing impaired. Her previous owners had probably abandoned her because of it. Violet had often wondered how they could have rejected such a precious animal. Cookie was nothing but love and affection. But then again, if they hadn’t given her up, she never would have come into their lives. What would Violet have done if Cookie hadn’t been there after Bob was gone? And now that Sydney was away, having Cookie there made the loneliness less burdensome. “Her name is Cookie.”
“Hi, there, Cookie.” The man reached under her chin and brushed her soft fur.
Cookie’s tail wagged faster, and her mouth dropped open in a smile.
“I hate to tear my dog away like this,” said Violet. “She really loves to be petted, but I have to go. I have an appointment, and I’m running late.”
“I’m sorry.” The man rose to his feet.
His tall, lean body and handsome face had caught Violet’s attention since the first time she had seen him. She had often found herself watching him without wanting to. Standing there now, the sunlight bathed his sandy blond hair, causing its natural highlights to shine like gold.
He wasn’t the youngest of men. His face had been weathered by time, but he still had a youthful appearance.

My name is Cindy Flores Martinez and I’m from a suburb of Los Angeles. I write sweet romantic comedy and inspirational romance. My debut novel, Mail-Order Groom, started out as a screenplay and movie project. I spent years shopping it around Hollywood, New York, and other parts of the world and had two well-known actors: an Academy Award nominated actor and a blockbuster film actress, interested in portraying the lead character’s parents. After not finding the success I wanted, I officially canceled my film production company, Mail-Order Groom LLC, in November of 2009 and embarked on the journey of turning my screenplay into a novel. I have an MFA in Creative Writing with an emphasis in Screenwriting. I have been a screenwriting instructor, screenplay consultant, script reader, and screenplay collaborator. 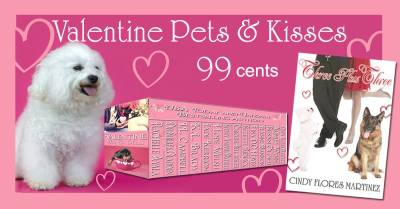