The Vet’s Valentine Gift by J.L. Campbell
Matthias Laing has snagged the woman of his dreams, but his job as a vet keeps getting him into trouble. The situation is past complicated because of the growing assortment of animals in Toni’s house and to top it all, the conflict between Matthias and her daughter’s dad. Can Matthias and Toni’s budding romance survive their challenges and if it doesn’t, will Jade, her precocious five-year-old find a way to play Cupid and fix things by Valentine’s Day?
Excerpt
I poured a glass of coconut water and went back to the living room, conscious of how awkward I felt after yesterday’s argument with Matthias. It had probably been a mistake to call him, but Jade hadn’t given me a choice and would have found a way to contact him herself if I hadn’t. Squaring my shoulders, I entered the living room.
Jade still had the kitten in her lap and was talking to Ridley.
” … treat him nice, okay boy?”
Ridley’s head was tipped to one side as if he understood what she was saying.
When she patted him on the forehead, I was sure he smiled, which forced me to bite my lip.
Every time he did that thing that looked like a smile, I gave thanks for my daughter. She was the only person I knew who got that reaction from both people and animals.
Matthias was sitting on the sofa, and I put the glass into his hand and sat adjacent to him. “So, the cat will be all right?”
“Yeah, from what Jade told me, Ridley was just playing with him.” He drank from the glass and then put it on the table. “He could easily have done him more harm.”
“How old is it anyway?”
“Around three or four weeks old.”
“I’m glad I won’t have to explain to anybody that our dog killed their cat.”
“Just like you nearly killed Ridley,” Jade said.
When I rolled my eyes, Matthias laughed and I didn’t bother to correct Jade. Instead, I said, “It’s a good thing we stopped and checked him out. Otherwise, you wouldn’t have a pet.”
“And now we might have another one,” she said.
I shot a desperate look at Matthias, who only smiled and picked up the glass for another sip. 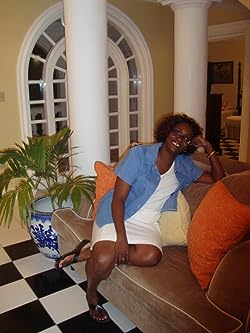 J.L. Campbell is an award-winning, Jamaican author who writes romantic suspense, women’s fiction, new and young adult novels. She has written thirteen books, four novellas and two short story collections.Her novels include the Island Adventure Romance series, which currently has five exciting, stand-alone stories and features feisty women and determined men. Campbell’s mission is to write stories that entertain and educate readers. She also writes under the pen name Jayda McTyson. She is a certified editor, who also writes non-fiction.Feel free to join her mailing list for news and updates http://eepurl.com/n29ZH or her Facebook readers’ group at https://www.facebook.com/groups/iarreaderssuite/Visit her on the web at http://www.joylcampbell.com