Meeting Police Constable Callum Forde on the worse day of her life, makes cat lover and scientist Wendy Wilde question all that she values, her cat’s loyalty and the role science plays in love.

Excerpt
Next time? He didn’t want her going out by herself which was a bizarre thought, with not even ten full minutes in her company.
“Make sure that you do.” He ordered, in a voice he usually reserved for delinquent yobs.
“I’m sorry.” She said and to her horror felt the sting of tears. It had been a horrible day and had ended even worse. This was New Years, she should be happy, looking forward to the year ahead, but instead she was sat in a police car, unmarked, but still a police car, with the cutest policeman she had ever seen in her life, but he was telling her off and treating her like a criminal. This day was officially the worse day of her life. Oh what a way to end the year and start a new one, she sniffed.
“I’m sorry,” Callum rushed, seeing the sheen of tears. “I didn’t mean to scare you.”
“It’s okay. You’re right,” she admitted, blinking rapidly to get rid of the tears. “I don’t usually go out at night and I didn’t think. It makes sense,” she went on bravely, reaching for the door handle. “Thank you for the lift and Happy New Year.” She said brightly, as she scrambled out of the car.
Callum got out looking over the roof of the car waiting for her to open her front door. Ever the protector, he watched as she fished her keys out of her bag and fumbled with the latch. She dropped the keys.
“Need any help?”
“No it’s okay. I’m just a clutz as you already know. Petri dish? Keys?” Wendy shrugged, putting her hands out, palms up as though they were scales. “Same thing.”
Callum heard the wobble in her voice. She was trying so hard to be brave in front of him and he wanted to wrap her up in his arms and tell her everything would be okay.
He walked towards her. “Here,” he offered softly, taking the keys from her and smiling at the red plastic key ring shaped like an atom. “Let me.” He unlocked the white pvc door, similar to his and let it swing open.
“Thanks.” She mumbled, stepping into the hallway and turning to him.
Callum spied the small rectangular box on the wall, the green light steady, when it should have been blinking on their entry. “Why didn’t you program the alarm?”
“The cat.”
“The cat?” He repeated faintly.
“Mr. Snuggles,” she explained. “He comes and goes through the cat flap and sets off the alarm when he jumps onto the kitchen counter. I’ve tried to make him stop, cats on counters is so unhygienic.” She flicked her hands around. “But he won’t stop. He never listens to me. He’s such a cat.” Then she smiled softly. “But I love him.”
Callum could not believe what he was hearing. She lived alone at the end of a street where her garden ran parallel to a road busy with foot traffic. There was a field at the back and she didn’t use the alarm? He was incensed.
“Let me get this straight,” he said, folding his arms over his chest, unable to hide his irritation. “You have an alarm but you don’t use it because of the cat?”
“Uh uh.” She bit the corner of her lip. He was not happy. 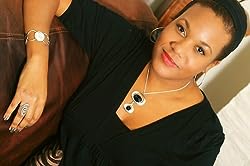 Caroline Bell Foster was born in Derby, England and with her family went on a six week holiday to Jamaica. She stayed for 18 years!
Ever the adventurer Caroline bought her first pair of high heels in Toronto and traded her pink sunglasses for a bus ride in the Rift Valley at 18. She wrote her first short story on that bus and had it published the following year in a local newspaper.
Caroline has always written in one form or another from a very young age. She started her first diary at age 7 and short stories and articles kept her occupied throughout her teens. Feeling the restrictions of short stories for newspapers, Caroline switched to full length novels letting her creativity flow.
Caroline is also known as ‘The Caribbean’s Leading Lady of Love’ as her novels Ladies’ Jamaican, Caribbean Whisper’s, Saffron’s Choice tend to reflect her love for the Islands. Caroline’s fourth novel Call Me Royal has just been released.
The author now lives in Nottingham, England with her husband and two children.