The Crazy Girl’s Handbook by DelSheree Gladden
Spending the weekend babysitting her two nephews and a puppy was supposed to be fun. Sweating to death at a baseball game while getting gum in her hair, soda down her shirt, and an ice cream pedicure wasn’t part of the deal. Neither was finding out the best guy she’d ever missed a blind date with had witnessed it all. Longest. Weekend. Ever.
Excerpt
EXCERPT: The Crazy Girl’s Handbook – DelSheree GladdenWe looked both ways before crossing the street. Both boys held my hand and Thor stayed right at my heel with the leash wrapped around my wrist. The second we set foot on the sidewalk on the opposite side of the street, the boys took off and Thor made a valiant attempt at following them. Problem was, his leash was still looped around my wrist so I could hold the boys’ hands more easily. So when he lunged forward to follow, I didn’t have any control of the leash to stop him from taking me down.
Pain blossomed in more than one spot as my elbows and palms hit the cement and my head whacked into the decorative stone edging that lined the grass. Thor yelped as my dead weight kept him from getting any farther, then doubled back to see what was wrong and stomped all over me at least three times before settling on my head. By the time my senses cleared, I was so tangled in leash and puppy I couldn’t even figure out where to start. My head and arms throbbing didn’t help at all.
“Thor, get off,” a firm voice said.
I thought I wanted to die when I got gum in my hair, or soda ice down my shirt, or an ice cream pedicure. Those were nothing compared to having to be rescued from an over-enthusiastic puppy by Roman Carpenter while covered in dirt, grass, and blood. It was a miracle I didn’t give up right then and just start crying. I loved my nephews, but I was never going to be able to show my face in this neighborhood again.
The heavy weight of the squirming—and rather large—puppy was finally removed from my face. I heard Roman ask one of the boys to hold the leash, but I kept my eyes closed out of pure shame. Not until a pair of hands pressed against my face did I even dare to breathe. Even then, it was a gasp at the urgency behind the touch.
“Greenly, are you okay?” Roman demanded.
The hint of worry in his voice forced me to peel my eyelids apart. I peeked up at him through half-opened eyes and was startled not to find him laughing at me again. There was real, honest fear in his expression and it left me speechless.
“Are you okay?” he repeated.
Breathe, Greenly. “Yeah, uh huh. Yep.”
He just stared at me for a moment. Probably because I sounded ridiculous. “Are you sure?” he asked.
I tried to sit up in order to prove I was just fine. The sting of putting my hands on the ground made me hiss and I felt a little woozy when I tried to move.
“Whoa, whoa,” Roman said, which made me feel a little like a horse. “Don’t move. Let me help you.”
Great, just great. I tried again to sit up on my own. “Really, I’m fine.”
“No, you’re not,” Roman said as his arms slid beneath my arms and legs.
I experienced an irrational moment of panic, not because the idea of Roman carrying me off somewhere was frightening, but because being this close to him would expose everything about me I hadn’t already managed to bare. He lifted me easily and my breath caught as he adjusted his arms and I felt momentarily unsupported. Then his grip rolled me against his chest, to a place of absolute security. I don’t think I took a single breath as he walked up to the house. 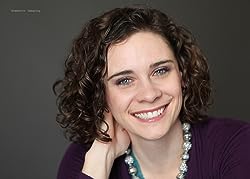 DelSheree Gladden was one of those shy, quiet kids who spent more time reading than talking. Literally. She didn’t speak a single word for the first three months of preschool, but she had already taught herself to read. Her fascination with reading led to many hours spent in the library and bookstores, and eventually to writing. She wrote her first novel when she was sixteen years old, but spent ten years rewriting and perfecting it before having it published.
Native to New Mexico, DelSheree and her husband spent several years in Colorado for college and work before moving back home to be near family again. Their two children love having their seventeen cousins close by. When not writing, you can find DelSheree reading, painting, sewing and trying not to get bitten by small children in her work as a dental hygienist.