Her Perfect Catch by K.L. Brady
Nerdy, struggling sports writer Melanie Vincent needs a miracle when her dream of running a nationally recognized blog hits a snag due to low readership. After Mel is gifted a pair of Super Bowl tickets for years of faithful dog sitting, she has a chance encounter with her favorite football player that leads to the inside scoop on the biggest story of her career…and maybe the love of a lifetime.
Excerpt
The lobby was no less elegant than the hotel’s exterior, draped in luxurious natural-colored decor with reddish accents, Italian marble, and ornate European-styled furniture placed in cozy, conversational arrangements. The desk attendant, an older gray-haired lady with a southerntwang, shifted her eyes between them.
“Well, don’t you two make the cutest couple?”
“We do, don’t we?” Dylan said, wrapping his arm around Mel’s shoulder, grinning as if he won the lottery.
With one eyebrow up, Mel glanced at his hand and then brushed it off. “Uh, no, no. We’re
best friends.”
“Oh, I get it. Friends with benefits.” She winked.
“No, no. Just buddies.”
“Well, if he’s not with you”—she reached between her ample bosom and pulled out a
business card—“he can give me a call. I get off in an hour.”
“Uh, ma’am, we’d just like to check in, please. Any additional rooms available?”
She pursed her lips and gave Mel every bit of her attitude. “Afraid not. We’re all booked up until Monday. Super Bowl.”
Mel handed the woman her credit card, waited for her to process it for incidentals and hand her the keycards. “Room 315. Up the elevator to the third floor; your room is on the left at the end of the hall.” As Mel dragged her suitcase and Mack toward the elevator, his carrier handle started to cut into her finger so she swapped bags with Dylan. Then they pressed ahead through the pristine, marble lobby to catch a ride to their room.
“Mel, why do you keep doing that?” Dylan asked as they waited for the elevator to alert its arrival.
“Doing what?”
“Telling everyone we’re not together as if I’m a leper or something.”
“If my memory serves me correctly, denying that we’re a couple used to be your role. How many times have you told your potential prey that I’m your little sister?” Mel responded, giving him the side eye. “Guess you taught me well, Obi-Wan.”
He grimaced as the elevator doors opened, motioned her inside, and pressed “3.”
“Listen, I’ve wanted to talk to you about Gizelle. She didn’t cancel. I did…and there’s a
reason, something I didn’t realize until recently.”
“How many times did I tell you Gizelle was all wrong for you?”
“About a thousand, but that’s not what I’m—”
She let out a long exasperated sigh. “Dylan, while I just love hearing about your sexual
exploits and break-ups,” she said facetiously, “how about you hold that thought until after I’m out of a hot shower and into some pajamas.”
“But you don’t understand. What I’m trying to say is—”
Just then the doors opened and Mel stepped off the elevator. It was too late when she heard someone yell, “Go deep!”
An object collided against her temple, causing a dull aching pain to stretch across her skull and into her neck. Dylan’s voice screamed, “Watch out!” before all light and sound faded and the hall went black. 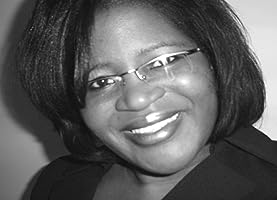 K. L. Brady is a D.C. native and grew up in Prince George’s County, Maryland, the setting of her debut novel. When she hit her “tween” years, her mother packed the family and moved to Bellaire, Ohio, where she eventually graduated from Bellaire High School. She attended the University of Akron for a few semesters, where she pledged Sigma Gamma Rho Sorority, Inc., before moving back to the D.C. area.She discovered a love for reading and writing at the age of three, by her mother’s accounts. Through the years, she has maintained diaries and journals, but the journals she wrote as an adult provided the inspiration for The Bum Magnet. Brady is a native Washingtonian (D.C.), lifelong Washington football fan, and professed nerd-girl who loves all things Star Trek, Star Wars, Lord of the Rings, and Big Bang Theory. She’s a member of Romance Writers of America, International Thriller Writers, the Maryland Writers Association, and Sisters in Crime and lives to write novels, especially those involving hilarious quirky characters looking for love. She is hard at work on her next several projects including the sequels to HER PERFECT CATCH (part of the Valentine’s Pets and Kisses box set) because girls love football, too!