Trembling Hearts by Suzette Riddick
Recluse Jason Carr is living in rural Virginia after an accident leaves him physically scarred. While taking a stroll and minding his business, the spunky Lezlie Sharpe literally crashes into his life, stealing the heart of his beloved pooch, Trooper. Now, forced to share living quarters, will Lezlie capture Jason’s heart too?
Excerpt
Whatever smart aleck retort she had ready to sass at him died on her lips. The dog’s owner was a mountain of a man. Her eyes traveled his entire length. He had to stand at least six-five with shoulders nearly spanning the width of the doorway he occupied.
She let out a long, slow breath. Lord have mercy he didn’t have a shirt on. And those pajama bottoms were riding low on his hips. She tried forcing her eyes not to stare at the dark hair on his chest tapering down toward his pelvis. But failed miserably. Her bosom rose and fell with each breath she inhaled and exhaled. Her fingertips were itching to caress his golden brown, chiseled, tight abdomen.
She bit her bottom lip to keep from moaning as her eyes traveled up to his stony face. The faded jagged scar slashed across his right cheek gave him a dangerous, but oh so sexy look. She could tell at one time he was what her grandma referred to as “pretty” boy handsome.
She continued to gape at him, her eyes blinking, wondering where in the world he had been all her life. The pain in her head was warring with the butterflies in her stomach.
The butterflies were winning. 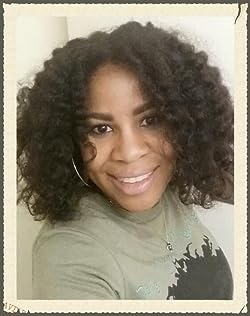 Suzette Riddick’s (formerly known as Victoria Wells) love for the romance genre is what encouraged her in 2008 to write her first novel A Special Summer. After receiving positive feedback from readers she was inspired to write the sequel, When Love Comes Around. And before she knew it, the Love Conquers All Series was born. From this series Second Chance at Love was nominated for an Emma Award. Currently, Suzette is working on a new series titled Love at Last.

Although reading and writing are near and dear to Suzette’s heart, being a wife, mother and nurse practitioner is what bring her the most joy.

Check out Suzette’s website at http://www.suzetteriddick.com. And check out her books written as Victoria Wells at amazon.com/author/victoriawells
Trembling Hearts is EXCLUSIVE to Valentine Pets & Kisses, so pre-order Valentine Pets & Kisses today and be the first of your friends to read Trembling Hearts  by Suzette Riddick
Amazon US ~ B&N ~ iTunes ~ Kobo ~ Amazon UK ~ Google